...was an adventure indeed. On May 31, after a short night's sleep and a very early flight, we stepped out of the terminal at Pearson and into the heavy heat of Toronto. H and I both work out and are rather fit, so we thought we'd expose ourselves to what the environment had to offer. We spent hours and hours walking the streets at a brisk pace, experiencing the city through our eyes, our feet and our lungs.

We spent a lot of time cruising Bloor Street. I photographed pigeons. 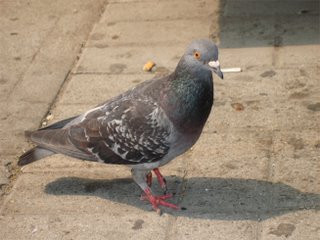 They were by far the friendliest pigeons I'd ever encountered. However, not everyone appreciates their friendliness. A well dressed, perfectly groomed woman whacked at a pigeon with her handsome umbrella as she waited for a walk light. The pigeon moved just out of her reach and then continued to peck at the sidewalk.

After that, we visited Book City on Bloor, the one near Brunswick. It's a lovely store and we felt quite at home there. H bought a couple books. I smiled at familiar titles by authors from out west. Sharon Butala, Trevor Herriot, Myra Kostash and, of course, Sylvia Legris.

That evening we walked to the shortlist readings. It was still very hot. We arrived early, so we sat in the courtyard at the Faculty of Music. There a quiet couple had lunch. A steady stream of people walked by, iPods between them and the begging gulls, aggressive squirrels and the young woman who was screaming on and on at a man. When it began to appear as if the screaming would never stop, we went inside.

Because we were early, we got the best seats in the house. The event was sold out. In the crowd were many faces I'd only seen before on book jackets. It was great to be part of that crowd, listening and laughing and clapping together. The readings were incredible and incredibly flawless. Sylvia was amazing. I was practically tingling when we left.

We stepped out of the building into a remarkably different night. It had rained. It was cool and fresh. We grabbed a pizza and ate it as we strolled back down Bloor, dodging puddles and people. Even at that hour Bloor was full of people.

The Madison Manor Boutique Hotel, which Tracy had recommended, was lovely and quiet. It's just a stone's throw from Bloor. There we slept and I dreamed a million faces, faces with expressions I'll never forget and can easily draw if I want.
Posted by Brenda Schmidt at 11:19 AM

Look, it's the amazing smoking pigeon!

My personal favourite is the pigeon pic with a cigarette butt coming out the, uh, other end...