The day of the Griffin awards

...was pure fun. H and I saw all sorts of things, including a team of men in kilts throwing a nerf football across traffic and teams of people in "Amazing Race" t-shirts racing across Bloor, some much faster than others. One driver got out and screamed at a cab driver while waving a broom at him. Another driver gave the finger to someone else and got two back in return, proving that some Toronto drivers can indeed drive without their hands.

We took a cab to the Griffin awards event. No one was allowed in until 7 p.m. sharp, so we wandered around. We actually ran into someone we knew even before we went in. Once they stroked our names off the list, the large men in suits let us in the door. 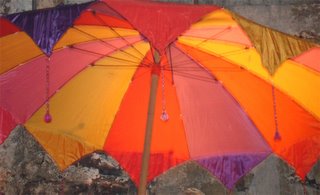 Just as we began to march across the rose petals into the huge, hyper-coloured room, we were ambushed by Bookninja.
George Murray proved to be every bit as charming in person as he is on the blog. Kathryn Kuitenbrouwer was lovely to talk to as well. We ended up at the same table for dinner. 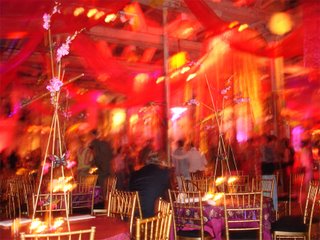 We shook hands with Scott Griffin, the host and founder of the prize, who greeted us and more than 400 others. Then it was time to eat, drink and merrily giggle. The appetizers were carried around on little silver trays and the servers smiled while they named each ingredient. H ate his weight in appetizers. I ate my weight in sweets. Everything was glorious. 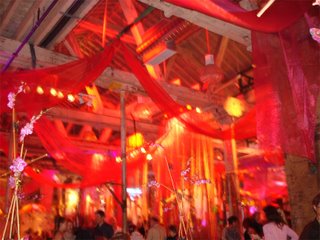 After the winners were announced - yay! congratulations! - it was time for dessert. George and Kathryn led us to the chocolate fountains. Dark chocolate for me and milk chocolate for those who are not true chocolate lovers. H collected souvenirs. Butterflies, a lantern, a scarf. He even tried to talk the tunic people out of a tunic (all the servers wore bright tunics of either fuchsia or purple - I wanted a purple one), but, alas, no tunic was forthcoming. I concentrated on the chocolate. 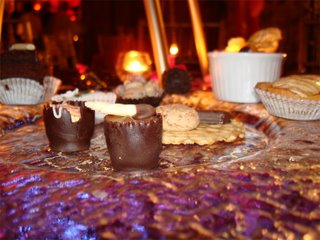 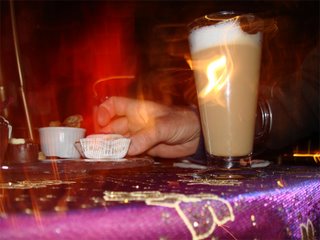 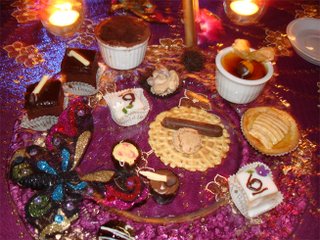 After we filled up on sweets and visited with yet another familiar face from St. Peter's, we headed to the crowded dance floor. People were dancing like mad. Imagine. There we were dancing to Abba's "Waterloo" and just a shimmy or two away was Michael Ondaatje, dancing to "Waterloo" too. It was divine. Thank you, Sylvia.

It was late by the time we crawled into a cab. We were giddy, at least at first. The windows were down part way and the breeze was refreshing. At the first red light the cab driver put the back windows up as gaunt, young people brushed against the cab with their hands out, asking for money. He did the same at the next red light and every red light thereafter.

Then came the aftertaste of chocolate.
Posted by Brenda Schmidt at 3:45 PM

Wow! It looks wonderful. Thanks for the photos and the details.

I second Tracy's wonderful! And oh, those treats! I'll be spending today fighting a chocolate/creamy/crisp hankering.

Thanks Tracy and Anita. I was using a new little camera. I didn't have time to read the manual and it shows. The most disappointing pics are of the nummy cake in Winnipeg. I dunno what I did wrong there. With a field trip and a research trip coming up, I better get it figured out or replace it with something that gives me reliable results.

Hack schmack. Stand up and take a compliment, G.

Can't he slouch and accept a compliment?

(I'll also chip in with my second 'sounds nifty' of the week...)

Welcome home, B! Sounds like a spectac time in T.O.! And that Sylvia won must have been well, gosh, it was the icing on the cake, I'll bet!

Bet your puddy-tat was happy to see you. Or not, as cats are wont.

Thanks Berlynn! It was wonderful.

Ya, the cat is making me pay. When she was younger she'd ignore me for a couple days after we'd return from wherever. Nowadays when we get home from a trip she demands my undivided attention for a couple days. It's pretty well impossible to get anything done. I'm sure that's the whole point.