...and a cold one at that. It was -35 when we got up, but it was calm and the ice crystals glorious. While we had coffee, we counted the birds that showed up at the feeders, the Gray-crowned Rosy-Finch among them. It's been here since December 9. We've had plenty of Pine and Evening Grosbeaks all winter. Redpoll numbers are hovering up around 20 now, which is low compared to most years, and the majority are Hoary, which is unusual as well. All the regulars showed up, too, except the Downy.

We decided to make a point of tracking down some ptarmigan today. That means scouting the area for fresh tracks early in the day and then returning to the freshest of the tracks in late afternoon when they start coming out to feed. Here are two we found enjoying a little sun. 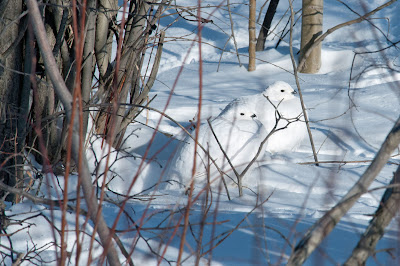 And here's one that was just plain hungry. 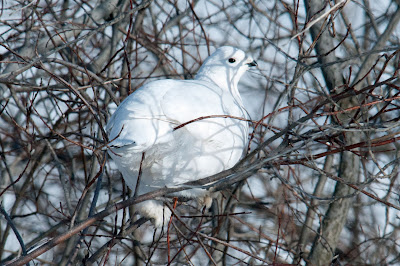 We saw four Willow Ptarmigan in total, though the tracks suggest there are many more. We could've waited longer for more to fly up into the willow, but decided to head home instead. We've had a lot of snow over the past while and the roads aren't birding friendly at all. There's no place to safely pull over.

What a cool bird to have in your backyard! ;) Lovely photos!

Thanks! These weren't in our yard, but their location falls within the GBBC guidelines. I love looking for these birds.

They're pretty nifty! And hard to find sometimes.

A big perk for a very cold day. Lovely birds and great photos of them.