The Chinchaga Firestorm: When the Moon and Sun Turned Blue
Cordy Tymstra
The University of Alberta Press
Published June 2015 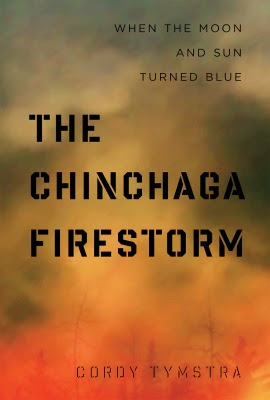 June, 1995. We were heading north along the Hanson Lake Road on our way home to Creighton, the boreal forest thick, hot, and horribly dry, the smoke ahead growing more worrisome. At around the 300 km mark, we came to a stop. A wildfire had closed the road. The flames were horrifying. A firefighter, face streaked with sweat and soot, nodded when we turned around. We were just 30 km from home, but we’d have to drive another 719 km to get there.

This is another bad year, numerous large fires affecting people near and far. This spring, thanks to advances in technology, I checked the daily wildfire map online before we set out on trips. I checked it every time I smelled smoke, which was almost constantly. On Twitter I watched and worried about the exodus of fellow northerners from communities north and west, some practically driving through flames, some sitting in boats on a lake while their home burned. I worried about the fire crews. Storm after storm, often centred on the same fire-stricken regions, brought intense lightning, but little to no rain. The news was exhausting and often perplexing. “Boreal forest being driven to tipping point by climate change, study finds.” Posted on August 21, 2015, this CBC headline came as no surprise. I didn’t think The Chinchaga Firestorm: When the Moon and Sun Turned Blue by Cordy Tymstra would be surprising either, but this vigorous historical study of the effects of forest fires proved fascinating.

“The past informs us of the need to find new and better ways to manage fire; otherwise, the assault of big fires, fast fires, and intense fires will be relentless and indiscriminate, ” writes Tymstra, a Wildlife Science Co-ordinator with Environment and Sustainable Resource Development at the Government of Alberta. He builds his argument around the 1950 Chinchaga Firestorm, which “comprised an estimated 100 wildfires” and burned 3,500,000 acres of forest in northern Alberta and BC, creating “the world’s largest smoke layer” in the atmosphere and a variety of curious optical effects. The blue moon, blue sun, and dark days caused a great deal of anxiety in places as far away as Arbroath, Scotland. “For several hours after the blue sun disappeared, inquiries to the newspaper offices jammed the phone lines.” Memorable examples and clearly written explanations bring these rare phenomena to life; they also show how slowly, and sometimes oddly, the science unfolds. This makes the later discussion around “climate and climate change processes” all the more sobering: “Fire decides whether our boreal forests become carbon sinks or sources,” he tells us. “This essentially makes fire managers carbon managers.”

Tymstra reminds us that the “boreal forest is particularly unique because it is designed by nature to burn.” Thanks to countless variables, no fire is the same. Thus the management of fire, as we saw in Saskatchewan this year, is a complicated matter. Some things, however, are predictable. Politicians arrive at the scene. There are umpteen photo ops. From that point on, onlookers have to sort through the politics of fire in order to see the fire, though in many ways, as we see in this book, they’re inseparable. “Politics fuels fire management organizations. When fires arrive, fire managers make decisions based on government-directed policies,” Tymstra writes. Extensively researched, his in-depth look at the “politics and human dimensions” of the Chinchaga Firestorm reveals the underlying politics at work all along.

“Despite the increasing expenditures to fight fire, the declining marginal returns on investment suggest fire management agencies in Canada and the United States are at a critical juncture,” wrties Tymstra. In the course of his discussion, he looks at the 2003 Kelowna Fire (BC), the 2011 Slave Lake Fire (Alberta), the 2006 Esperanza wildfire (California), and others, showing how the amazing advances in fire suppression technology can quickly be overwhelmed by this ancient natural force. Words from his introduction stayed in mind throughout:

The indigenous peoples of the northern boreal forest choose safe places to live, strove to protect their villages from fire, and used controlled burns to provide various ecosystem goods and services. They embraced and learned to live with fire. The changing face of fire management today necessitates a re-thinking and re-tooling to adopt a similar approach.

Fire events affect us all and it’s only going to get worse. Knowledge of this fire history is key to seeing a way forward. Tightly written and all too relevant, this captivating book is necessary reading.
Posted by Brenda Schmidt at 2:43 PM