The latest additions to my collection 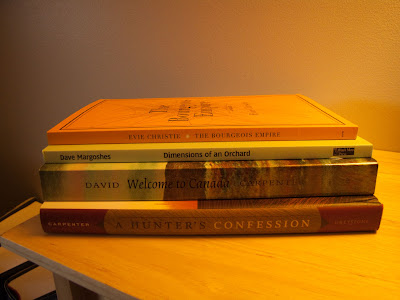 The Bourgeois Empire by Evie Christie, which was reviewed over at the Globe today.

Dimensions of an Orchard by Dave Margoshes.

Welcome to Canada and A Hunter's Confession, both by David Carpenter and both reviewed here.

I wrote an occasional poem and read it at the open mic on Friday. Here it is. 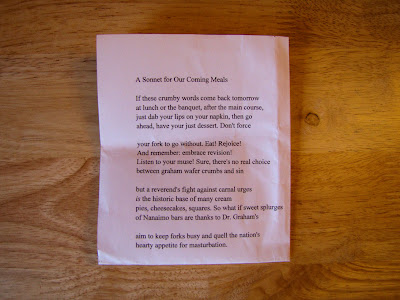 Who knew there'd be cheesecake at the banquet.
Posted by Brenda Schmidt at 2:49 PM

Good to see this piece, after sort of hearing it the other night. "Crumby" is a very Catcher in the Rye word.

Ack! I bet I lost everyone just three words into the poem! I bet the whole room was having Holden Caulfield flashbacks!

LOL! the last line comes as a surprise

:) I wrote the last line first after learning of the history of Graham wafers/crackers.

Incidentally, I spent the bulk of a morning going between "wafer" and "cracker." Initially I'd used "Graham cracker" but H said he thought "Graham wafer" is what we say in our areas of SK, so finally I went with that. Then I came across CO-OP brand "Graham Cracker Crumbs" in a relative's pantry a couple days after the fact.

Well, cracker or wafer, they've always been too bland for my liking. Heh.

the sin, I mean, cheesecake, on top definitely helps with the taste. poor Mr. Graham, his road to heaven was paved over by other intentions.

Dessert will never be the same!

ha! That's for sure!

Fer what it's worth, I like the sacrilegious undertones of wafer.

Ha! I can't believe that never occurred to me.

It's because you're a sinner.