In my wanderings this morning

...I read Nikki Reimer's post over at Lemon Hound and the comment that followed. It immediately brought to mind the session called "Poetry: The Short Form and the Long Form" that I attended at the SWG conference in October. The panelists were Hilary Clark and Robert Kroetsch. As expected, the room was packed and so was the session. I rarely take notes at sessions these days, but I was among the many jotting things down. I didn't want to forget anything. So this morning I dug the notebook out of my bag. I wanted to see what Kroetsch had to say about the long poem and failure. Here's my notes. 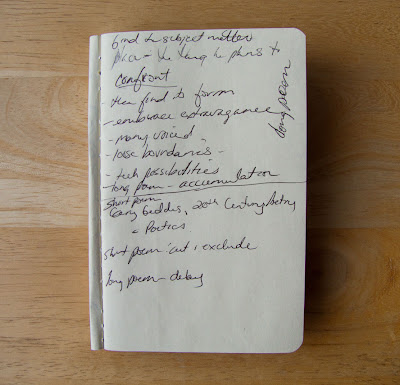 Apparently I failed to jot it down.

Annoyed with myself, I crawled on the bike and pedaled my way through Kroetsch's Seed Catalogue. Not exactly punishment, I know. All the while I thought about accumulation and delay and how it might apply to what I'm working on.

Serendipity is a dippy word in my opinion, but it did come to mind when I hit these words on page 17:

Though I've read those words many times before, it was never when I needed them. I know I need them now.

As for what Kroetsch said about failure at that session, I can only guess. I now have several versions going through my head, none of which sound quite right. What I know for sure is where he was looking when he said those words. I remember the expression on his face. I could easily sketch it. And as I pedaled I thought a sketch was indeed in order. But then I hit these words on page 23:

We silence words
by writing them down.

He is somewhere under the failed wave.

So there I go.
Posted by Brenda Schmidt at 1:57 PM

Fabulous post, Brenda. Love your reading of Kroetsch, and the image of your notes. I was looking through Seed Catalogue a few days ago, looking for a good quote...you seemed to have down much better than I did.

Thanks! Big thanks to Nikki's post and your comment. It's funny how one can be bogged down in a swamp and then suddenly find good footing. And maybe a way.

Thanks! You helped me think again!

And no one has commented on my crappy penmanship! You guys are so nice!

About the penmanship: the harder I'm thinking the more illegible.

Ha! Yes, my handwriting ain't what it used to be. I do less and less of it. Even first drafts are all done on the computer now. I never thought I'd abandon the pen. But hey.

Tracy posted her notes from that session, which are lovely and include what I failed to write down.

Thanks for your post Brenda, and your notes as well.

Thanks Nikki! I'm enjoying your posts at LH.