Last week was a great week

...for mail. I received two lovely packages. One I'll let you in on. It was a large box. Inside we found explicit instructions. Beneath that a giant spider. 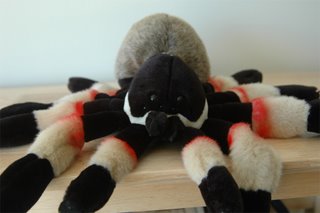 As the people who attended the winter colony know, I am working on a new project that involves spiders. I took 34 large prints of H's spider photos with me to St. Peter's Abbey and had them spread out in the room while I worked. I read work from the project at the final reading. I've received some thoughtful spider-related gifts from colonists. One left "A Noiseless Patient Spider" by Walt Whitman on my door. Another sent me a musical version of the same poem. And now, thanks to my pop culture mentor, a giant spider sits in my office, staring at me with all eight eyes, as if expecting something.

While reorganizing my office today, I was listening to the cd my pop culture mentor sent me, a superhero mix with every Superman and Spiderman song known to humankind, with a little Buffy the Vampire Slayer and Ninja Turtles thrown in. The cd ends with Rossini's William Tell Overture. Rossini does not impress the cat, but it certainly got me moving. I got tons of work done.
Posted by Brenda Schmidt at 5:36 PM

Hee-hee. He looks very sweet up there.

Also, I'll have you know that there are still many superhero songs out there ... I'm working on the second collection, which will feature such classics as the Theme from the Incredible Hulk (cartoon version) and possibly Chip and Dale's Rescue Rangers. The definition of a hero is very broad. *g*

I live only to educate others.

No pop culture mentor needed for you, Anon. I didn't grow up with those turtle guys, so the theme song was new to me.

Paula Jane, my pop culture mentor! Checking in to see if I've done my homework? The spider is so cuddly, by the way. And that cd...I really like "Superman is Dead" by Our Lady Peace. And you wouldn't believe how relieved I am to hear there are more superhero songs. I mean, what would the world be without Wesley Willis' "I Wupped Batman's Ass"? Good grief. The cat did not like that one at all. Not one bit.

i also received said marvelous superhero compilation and it's abso fabu! (or something). but please, dear, PJR, i just *know* you can dig up the theme to Rocket Robin Hood for your next gnarly collection. "in the astounding years to come!"