Stories about my time at the Mackie Lake House

...appeared in the Vernon Morning Star and the Penticton Western News. Thanks to the writers of both.

Hard to believe we're already halfway through October. Here's a pic H took while I was working at the Mackie Lake House last month. In this case I had no idea a camera was aimed my way. 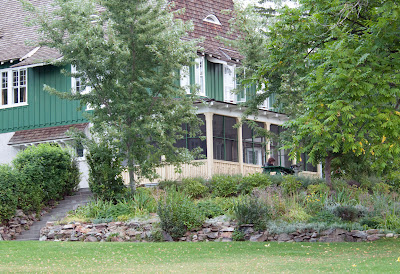 Hard to believe that's me sitting at the table.
Posted by Brenda Schmidt at 5:12 PM

Very nice, B. (I look forward to reminding you, at some point in the future, that "sometimes an unsatisfied urge proves generative.")

It sounds like such a great experience, Brenda. You are what I always want to be when I'm in the Okanagan - a writer and a painter.

Thanks, Kathy! It was. I feel really lucky to have been given time there.

cool. can you do w-i-r there again or is it one per person?

It is. One time I believe. There's one WIR a year and the understanding that the writer will return to launch the book the following fall. The books out of the WIR are part of the Mackie Lecture and Reading Series published by Kalamalka Press.