For years the SWG Conference and AGM

...has been held in mid October before winter sets in. Migration is still in full swing. Cranes, hawks, eagles. Geese by the thousands. Everything on the move. It's a beautiful time of year. The AGM wraps up at noon on Sunday. If it's in Saskatoon we might get home at dusk if we're lucky. When it's in Regina we must drive the last leg in the dark and that brings with it more hazards as deer, moose and caribou are on the move. The rock cuts can be slippery. But we choose to live where we do. Attending the conference and AGM is a matter of choice as well.

We had a great time at the conference. Hats off to the SWG staff, presenters and readers. The addition of the hospitality room was brilliant. I've never seen that kind of interaction at the conference before, but mingling in close quarters will do that. It was great to meet new people and catch up with old friends. Thanks to everyone for the fun. Here's what I bought at the book table: 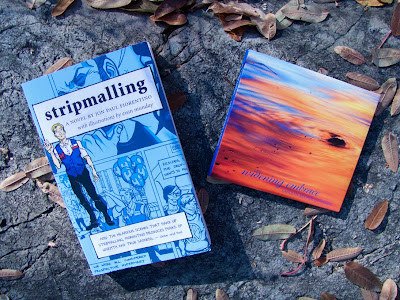 Widening Embrace, a newly launched CD by Carolyn McDade & Friends, one of those friends being my friend Bernadette Wagner. All profits go to a good cause.

Because the conference was held in Regina this year, we had plenty of time to tally things up on the way home. The price of everything. Gas. Hotels. Meals. Conference fees. We also had plenty of time to talk about next year. With the conference likely moving to a later date, we're considering a different approach to deal with rural realities. The practical matter of travel and road conditions cannot be ignored. H was talking to another rural member who echoed the same concerns. Neither party is too keen on driving that far in winter conditions. Whether we start attending every other year, take in less of the conference, or simply choose not to go, I don't know. But things change and we'll have to change accordingly.
Posted by Brenda Schmidt at 3:10 PM

Well Brenda you and H are now part of the attraction of every SWG conference. Just as you suggested a post-conference project for me, I suggest this for you: remind the SWG staff, firmly, that its commitment to rural SWG members will be undercut by any move to shift the conference later in the autumn.

There's rural representation on the board, so I trust the matter was considered carefully.

And thank you for those kind words.

Thought you said "skinned words" there for a sec.

I should add that I have and will continue to put forward my views and ideas regarding rural matters and anything else on which I have an opinion. For one, yesterday I suggested a Skype or Google+ option for those who'd like to attend a session but cannot physically be there. Pay a fee and you're at the session. The technology is there.

Alas, technology cannot yet place me beside you, for example, to share a laugh in the hospitality room and come up with our little projects.