...was this Rustic Bunting. According to Sparrows of the United States and Canada, this bird breeds in the Paleartic from northern Scandinavia to northern Siberia and should be wintering in China or Japan or thereabouts. But this little guy decided to head to Saskatchewan. The book lists the North American records of this bird, which are few and all from the west coast. Regular visitors to this blog would have noted the odd way in which this post has developed. Photos were posted first without context, followed by video. And now, on December 8, this paragraph. The reason for this is because we were consulting others to confirm the ID, as stated in this post to Saskbirds, using the blog as a convenient way to share the images and video, and were in the process of making sure the sighting is documented as well as possible. 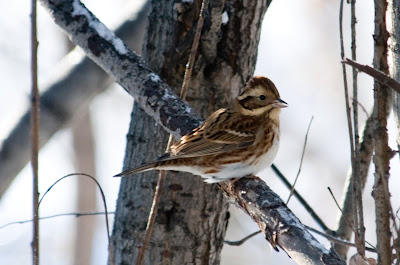 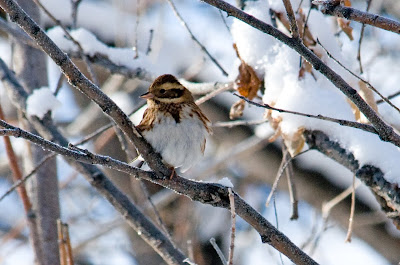 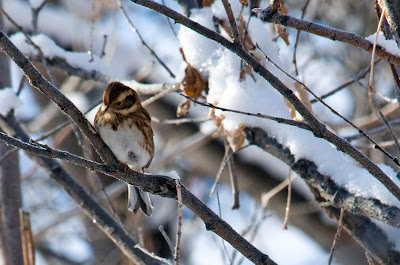 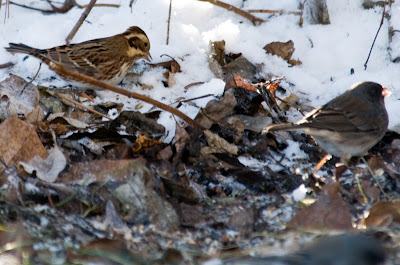 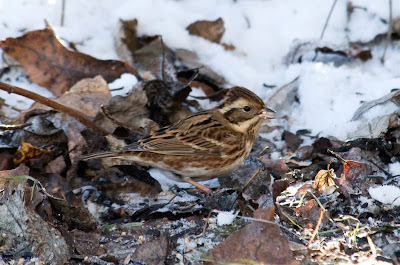 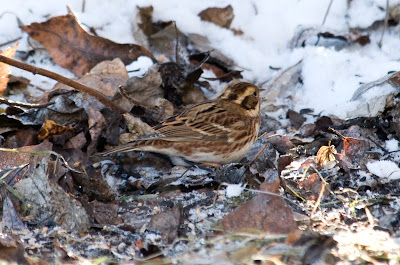 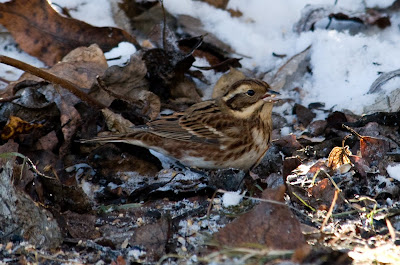 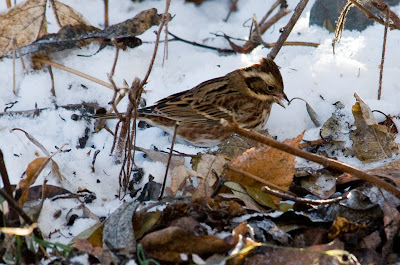 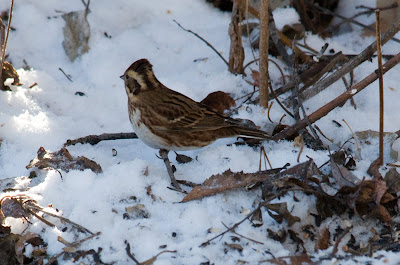 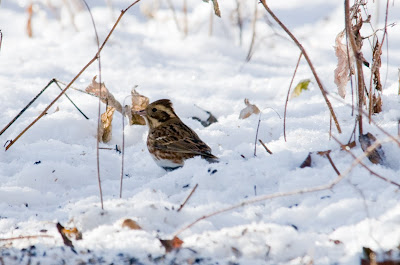 These photos were shot by Harvey Schmidt (H) today (Dec 4).

Here's HD video of the bird with juncos (See Dec 6 update below for better video).

Both videos shot by H on December 4.

Here's very good HD video shot by H of the bird on December 6. This is the better video I was referring to above. Probably the best of the lot.

Here's video of the bird hunkered down in a depression near our big feeder, which those of you who have been here will recognize. H shot this video yesterday.

It has turned cold, dipping to -34 overnight. The bunting was here off and on yesterday and again today.

Here's HQ video shot by H on Dec. 6, which gives a good size comparison of the bunting and the juncos.

This will be the last update here. The bunting has been showing up regularly, but not always with the juncos. There has been a little influx of redpolls with the colder weather and it seems to get along better with them. I'll post notice on Saskbirds of the last date seen when it happens. Happy holidays!

Here's photographs of the bunting today in extreme windchill conditions.

This will be the final update on this post. Happy holidays!
Posted by Brenda Schmidt at 2:55 PM

What a great bird to get in winter or anytime Brenda !!!!!!! You got some excellent shots and video too.

an elipsis of snow? Nice photos!

I also find it quite a coincidence that the "word verification" below is "nownests"!

oh, and a sparrow. Sorry I have an eye infection right now and can hardly see through the tears. I thought it was the SNOW that arrived with the juncos...

Absolutely a wonderful sighting Brenda and Harvey. The photos are also superb! Thanks so much for sharing and it couldn't have landed in a better yard for identification and appreciation. By the way, the photos only took about 45 seconds to load up on slow speed which is fast to us!! The video may pose a bit of a dilemma :-) Thanks again. Val and Doyle from the little location of McTaggart

Thanks for the comments. What a lucky sighting. I admire Harvey's patience more than ever after all the time he spent at an open window this weekend with camera in hand waiting for the bird to offer a better view. It's not much of a poser, that's for sure, so we feel incredibly lucky.

For those wondering what the deal is with this bird, here's my post on Saskbirds.

My wallpaper is now a Rustic Bunting!

Whoa! Awesome! Congrats on the find.

All I can say is WOW!!! Many thanks for your patience in documenting this Provincial "first"!

I am jinxed when it comes to finding Ptarmigan---I've never seen any of the 3 species. Now here's yet another reason to make that drive up the Hanson Lake Road!

Sandra's cousin Janice Imrie lives in Creighton. Keep that little stray around until the New Year and maybe we'll come up and I can add a couple 'lifers' to my list!!!

A Jealous "Guy" In S'toon

Guy, if you ever decide to make the trip, we'd do our very best to help you find a ptarmigan! Hopefully this little guy decides to stick it out. It was mighty cold here today.

Great photos! We'd love to pay you to use one in the next issue of ABA's Birding magazine. Simply email me ASAP at mlretter@yahoo.com to details.

oh, not only nice birdies, but a coup too.

love his macro pictures of spiders and moths.

Thanks Pearl. I'm finally beginning to unwind a bit. As you can see at the side, I've been doing some heavy climate change reading, so when the bird showed up my initial comments to H were more than a bit gloom-and-doomish.

I love his macro work too. Speaking of patience, it's amazing to watch H shoot pics of, say, a jumping spider. They look big in the pics, but most are very very small and they really do jump.

I can't help thinking of my old friend, Pamela Banting, who might not appreciate showing up so soon after the phrase "Rustic Bunting".

"Any Pamela Banting sightings?" I was about to say.

What a great bird to get in your yard. It proves you never know what you will find if you look.

So true! I still can't quite believe my eyes.

A wonderful bird! And I can't think of anyone more deserving of such a great sighting in their yard. It was a pleasure to meet you & Harvey after "knowing" you through your posts to Saskbirds over the last few years. Thanks so much for your kindness in sharing your special visitor with others.
Rob from Winnipeg

Thanks, Rob! It was a pleasure to finally meet you and the others! I'm so happy you all got good looks at the bunting. And I'm happy to see you made it home safely. Happy birding!