The Call of the Red-winged Blackbird: Essays on the Common and Extraordinary by Tim Bowling is truly extraordinary 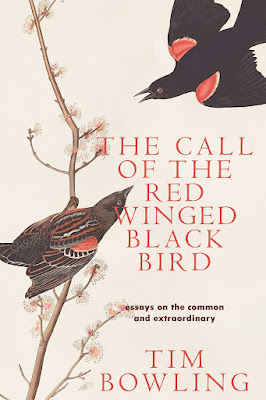 Late on a Sunday in January, the northwest wind driving snow against my office window here in the hills where few people live and none of them close, it’s strange to picture Tim Bowling mooning about in the wee hours under the moon in the heart of an Edmonton winter, but there he is, a celebrated author of twenty-one books, slipping around in the darkness of self-exile on a lengthy quest to understand the solitude to which he is increasingly drawn. There he is, a picture of success in late mid-life, success so few will attain, so established he can afford to abandon social media completely, taking the common reader along in these personal essays, knowing perhaps the reader will in turn tell everyone on social media how much he dislikes social media. It’s funny when you think about it.

So here I am to tell the digital world The Call of the Red-winged Blackbird: Essays on the Common and Extraordinary is one incredible work of art. In keeping with the tradition set out by earlier masters of the personal essay form as described by Phillip Lopate, Bowling puts forth the persona of a self-conscious, likeable curmudgeon, a conflicted idler at times self-deprecating, at times adorably clumsy (cue the pool scene), always questioning himself and the world around him, always questioning the truth of each story he tells. All but one of the essays were completed before the pandemic, but none have a before-times feel, each moving back and forth through time and space with unsettling ease.

The sensory detail in these essays is exact and propulsive, acting as memory portals that connect the individual tightly to the rest of us. In “Initiation,” the second of nine short essays in the first part of the book, five-year-old Tim is learning to skate, an experience that “possessed some of the terror of a religious experience undergone by a Christian who genuinely believes in the Old Testament god.” As his twenty-three-year-old brother helps him lace up his skates and little Tim puzzles over his brother’s choice of words, the narrator tells us this earlier version of himself was “a contemplative child, fated to become that loneliest of citizens – an intellectual.” The setting is key. They are on a frozen slough. It’s dark, a darkness freighted and foreshadowing life ahead. Tim falls hard on the ice. When his brother’s friends show up with beer, skates, and sticks, Tim, with innate trust, agrees to sit alone in the cold to watch the scene unfold right to its bloody end.

The essays in Part One, all strong, reflective, and entertaining, in some ways prepare the reader for “The Hermit’s Smoke,” the tremendous narrative meditation on solitude that is Part Two, an essay that would shine alongside the greats in Phillip Lopate’s anthology The Art of the Personal Essay. Running nearly 100 pages, and broken into three sections, “The Hermit’s Smoke” opens in darkness, with twelve-year-old Tim accompanying his father (a salmon fisher), and a doctor to a small silt island on the Fraser River to look in on the hermit Alf Harley who, as it turns out, is dying. An exhilarating deep-dive into a range of hermits and degrees of solitude follows. Bowling gives us stories of well-known literary hermits Thoreau and Montaigne, the famous hermit-criminal Christopher Knight, the explorer-hermit Richard Byrd, the Buddhist hermit Tenzin Palmo, the Trappist monk-scholar-writer-hermit Thomas Merton, and the vanishing poet Weldon Kees. As well, he gives us his memories of the Apollo 11 mission, and looks at the post-Apollo lives of astronauts Neil Armstrong, Buzz Aldrin, and Michael Collins. All the while the quest for meaning and the threat of meaninglessness gains gravity. The word “banal” is planted thirteen times in this essay, planted like moon boots, a troubling reminder of why Bowling has undertaken this inward journey in the first place.

As if that were not enough, all the stories of solitude in “The Hermit’s Smoke” are compared, threaded together, deepened, and advanced with quotes from the works of a wide array of noted thinkers, more than forty in all, such as poet Elizabeth Bishop, philosopher Walter Benjamin, and essayist Ralph Waldo Emerson who, for one, is critical of Thoreau’s extremes. These words spin around Bowling’s own extreme night walks under the moon, the winter of life in sight, his vividly rendered past always along. Bowling’s eventual rereading of Daniel Defoe’s Robinson Crusoe, the title character a castaway stranded on an island for twenty-eight years, takes us new places yet. With all these thoughts circling, the tension becomes almost too much to bear. Serious readers of personal essays know how hard it is to keep just a few matters in the air, let alone all this. I kept bracing for the break-up and crash, but to my astonishment the essay lands perfectly. I gasped audibly with surprise and delight for the first time in my reading life.

The Call of the Red-winged Blackbird: Essays on the Common and Extraordinary

Posted by Brenda Schmidt at 3:33 PM