The Gilded Guild: 50 Years and Counting

It's a windy day. In its honour I've changed the title of this blog.

So. Last weekend I took part in the Saskatchewan Writers' Guild's 2019 Annual Fall Conference & AGM --The Gilded Guild: 50 Years and Counting, a wonderful, full and inspiring conference from beginning to end. I hadn't been to a conference in a number of years, so I went in intending to make up for lost time, but it was like no time had been lost at all. My community was there. I felt at home. It felt good. 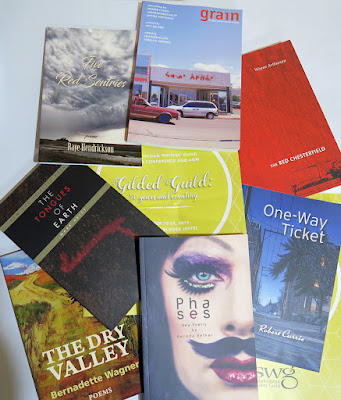 The weekend flew like good things do. I attended as much as I could, including three excellent workshops on Friday: "A Treed Workshop" with Ariel Gordon which took place in Wascana Park, "The Novel: Where Poetry Meets Information" with Jeanette Lynes, and "Make Them Wonder: Sparking Curiosity, Surprise, and Awe in Our Readers" with Daniel Scott Tysdal. I learned a lot. All three took place on Friday and my head was buzzing anew by the end. As is the case with conferences, there were concurrent workshops that I wish I could have taken in as well.

After the last workshop we piled onto a school bus, the seats taller, more padded, and squishier than I remember (the seats probably felt the same way about me), and headed to the Bushwakker Brewpub to witness the launch of the limited edition anniversary beer brilliantly named "The Unreliable Narrator," the epically heavy firkin carried in behind a great bagpiper by past president (and incoming president) of the SWG Jack Walton and the sixth Poet Laureate of Saskatchewan and master open mic host Gerry Hill, and tapped with flair and aplomb by Jillian Bell, the outgoing president of the SWG. It was great fun and the food delicious as always.

Also on Friday, I took in "Sifting for Gold,"  a great talk by John Agnew, publisher at Coteau Books. Wayne Arthurson's lecture "Write What You Care About" was really interesting. Curious about his approach to fiction, I ended up buying his new book The Red Chesterfield.

Daniel Scott Tysdal hosted "Turning Paper into Gold: 50th Anniversary Celebration" where long-time members Robert Currie, Jean Freeman, Lyn Goldman, and Glen Sorestad shared poignant memories. This and the trivia competition the next night pulled at my heart. So many Saskatchewan writers have come and gone, their contributions to the writing community living on and evolving.

On Saturday I attended "In the Context of Canada: What Our National Organizations are Doing," an informative session by Rita Bouvier and Bruce Rice. I heard terrific readings by the winners of the 2019 Hicks Long Manuscript Awards. I took in the moving, thought-provoking "What We Would Rather Forget: A Creative Nonfiction Panel" with speakers Dr. Janice Acoose-Miswonigeesikokwe, Alexandra Popoff, and Trevor Herriot.

I was part of "The Nourishment of Nature: A Panel Discussion" with Ariel Gordon and Bruce Rice. It was a thrill to sit with them. Thank you to everyone who attended and took part.

I attended "From Pen to Page: A Poetry Panel Discussion" and heard inspiring stories from Raye Hendrickson, Paula Jane Remlinger, and Chelsea Coupal.

I enjoyed the Spoken Word Feature hosted by Saskatchewan Youth Poet Laureate Alasdair Rees, who I had the pleasure of meeting. Featured were Austin Ahenakew aka The Noble Savage, Daniella Mercedez, and Tai Reign. They all gave stirring performances.

After that Mark Abley delivered the Caroline Heath Memorial Lecture: "The Warmth of the Sun Swooping." I expected it to be a tremendous lecture and it was.

The always fun open mic and social followed, hosted by the always fun Gerry Hill. The theme: "The Sword in the Stone." Gerry was rattling chains and swinging a light sabre!

On Sunday, prior to the peppy and efficient AGM, I attended the Presidents' Breakfast, where past presidents of the SWG reminisced. Hosted by Jack Walton, we heard from Robert Calder and Judy McCrosky (as a board member back then, I had the pleasure of learning from and serving with both) and Bruce Rice, who is also the current Saskatchewan Poet Laureate. It was great to look back.

I came away from the weekend feeling refreshed and grateful. Thank you to everyone.
Posted by Brenda Schmidt at 5:50 PM