The Larger Conversation: Contemplation and Place 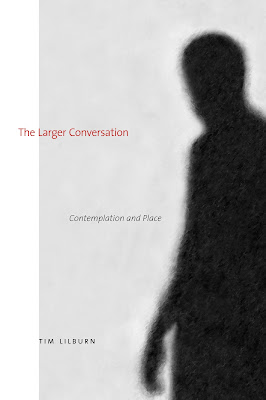 First an apology, or at least an admission. Early in The Larger Conversation, in his discussion of how late capitalism has “worked us down” to “an atomic self,” Governor General’s Award-winning poet Tim Lilburn writes “In reality TV and low-end blogs, the remnant is on view, the bare asserted self, no aides, no add-ons, no net of metaphysics.” Naturally I paused at this point. Who am I to be reviewing this complex high-end book with the intention of publishing the review on this low-end blog? I come to this book, the third of what the cover copy states is a “three-part manifesto on poetics, eros, philosophy, and enviro-politics,” knowing full well that I do not possess the philosophical chops, the necessary scholarship, the depth of reading, or the intelligence to properly grasp the work, but I come anyway, as I always have to Lilburn’s work, as I did to part one and two, as a poet with a sense of adventure, knowing that even if I am lost, I am welcome in these pages, I am welcome to feel my way around.

The cover states this is “a vital text for readers of environmental philosophy and for anyone interested in building toward conversation between Indigenous peoples and settlers.” Lilburn’s ideas around conviviality, “another of the virtues deepened interiority brings,” are elemental to this work, and his choice of form, as discussed in the introduction, is no accident:

The essay and the lyric poem are perfect instruments in this psycho-political undertaking of a contemplative return to being in the form of one’s place because both essentially refuse as bogus the confidence that underlies a complete account. […] Both, therefore, are toppling forms, inducing tentativeness and humility and, inevitably, permeability. They, in their incompleteness, promote conviviality and conversation—you need to talk to fill in the greater picture—thus both are heuristics and goads for a larger, a pandemic, conversation.
The seventeen essays and lectures that follow go back and forth in time, grounding themselves in biographical detail before plunging with Plato, Iamblichus, Ibn ‘ Arabi, and others to dizzying philosophical depths. In “Faith and Land,” a lecture delivered at Canadian Mennonite University in May 2008, Lilburn reflects on the writing of the poems in Moosewood Sandhills in the 1990s:

The book comes from that time in my life when I first realized, with a shock, that I had no skill to be where I was. One of the poems in that collection is called “How to Be Here?” This is a question that has preoccupied me now for almost twenty years. It seems to be our central political and cultural question, though it is rarely, if ever, asked.
In “Nothingness,” from the summer of 2010, the final essay before the epilogue, Lilburn is traveling. He has turned sixty. He has been “trying, I suppose, to tie things together in these peregrinations, to make it all somehow cohere. Some elements, however, resist any tug toward explanatory shape.” In the following section, he reveals he’s been reading The Mirror of Simple, Annihilated Souls and Those Who Remain Only in Will and Desire of Love, a book by Marguerite Porete, a beguine who we learn was burned at the stake in Paris on June 1, 1310, and with it he looks at interiority, reason, and knowing, the essay a collage, difficult and beguiling, resonating with the essays that came before.

As a poet, it’s always fascinating to read about the lives of well-known poets and the paths they’ve taken. Lilburn has been having conversations “over the last thirty years with a range of poets, thinkers, liturgists and ceremonialists.” One of these people is the much celebrated poet Louise Halfe, who appears in these essays more than once. The stories Lilburn uses to place himself are brief but vividly sketched. His “epic eight-hour talks” with poets in Beijing, his time in the basement beer parlour of the Hotel Saskatchewan, his periods of illness, his move to BC from Saskatchewan, are not simply framing devices, but always integral to the evolution and deepening of the piece. It’s the human touch toward which we stretch. The Larger Conversation requires much stretching. That stretching in itself is transformative.
Posted by Brenda Schmidt at 12:14 AM