April was an incredibly full month and wow did it fly!

I read and read and read and what a pleasure! Thank you to all the poets out there. Your work enriches my life. I thought I'd post a list here of the poems I turned to this month to help celebrate the occasion.

The Saskatchewan Book Awards asked me to speak at the awards event which took place in Regina on Saturday. I decided to celebrate the shortlisted books of poetry, so I bought, read, and studied the seven books of poetry shortlisted for various awards and chose one poem from each to read at the event. Someone asked me if I was nervous and thinking about it now I have to say I was more than a bit worried. The last thing I wanted to do was stumble over the words of someone else's poem during the reading, but all the poems are so beautifully rooted in language and voice that they pulled my voice into theirs and made themselves heard, if that makes any sense. Here are the poems I read that night:

Lisa Bird-Wilson, “Beside a Residential School,” from The Red Files, Nightwood Editions, 2016.

Carla Braidek, “Heart’s Breath,” from A Map in My Blood, Thistledown Press, 2016.

Louise Bernice Halfe, “His Name was Boy,” from Burning in this Midnight Dream, Coteau Books, 2016.

Sylvia Legris, “On the General Nature of the Glands,” from The Hideous Hidden, New Directions, 2016.

To celebrate National Poetry Month, the Saskatchewan Writers’ Guild sent out a quotation to the membership on every work day during April. The quotations, chosen by me, are first lines from poems by poets from or living in Saskatchewan. They were selected and arranged with the aim of adding up to a four-part poem by month’s end. It was an exciting challenge and I read so many amazing poems in my search for lines to make this idea work. Here is the list of poems that I drew from in the end:

Carla Braidek, “A Vague and Slippery Thing,” from Carrying the Sun, Thistledown Press, 2005.

Taylor Leedahl, “Hide and Ghosts Seek,” from No Apologies for the Weather, Thistledown Press, 2008.

Kelly-Anne Riess, “A Kiss From the Door,” from To End a Conversation, Thistledown Press, 2008.

Bruce Rice, “Crawlspace,” from Life in the Canopy, Hagios Press, 2009.

Katherine Lawrence, “Endangered,” from Lying to Our Mothers, Coteau Books, 2006.

S.D. Johnson, “But Quietly,” from Hymns to Phenomena, Thistledown Press, 2000.

As I said on the Saskatchewan Poet Laureate Facebook page, on our way home from Regina yesterday we stopped to further celebrate the spirit of the place of Saskatchewan. The drama of spring migration is everywhere you look. 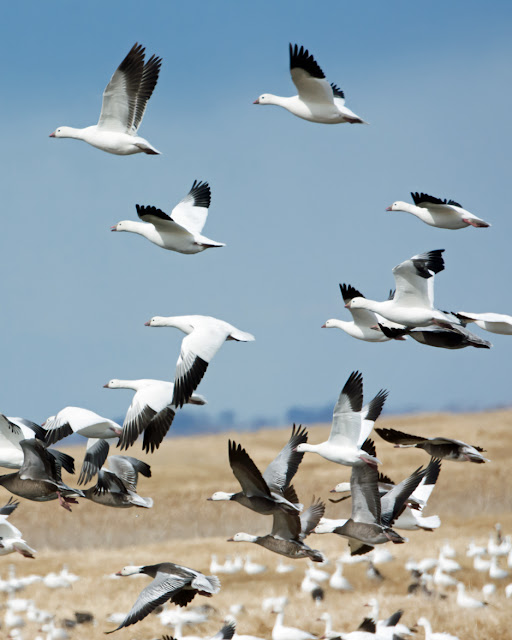 As we sat on the edge of the highway watching geese on the move, I wondered about migration and its relationship to imagination. I'm still wondering.
Posted by Brenda Schmidt at 4:04 PM