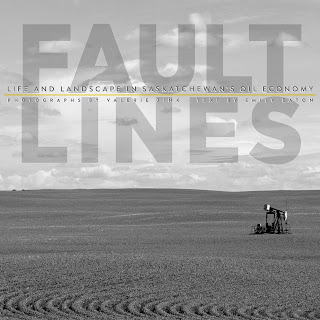 “As spectators, we need to recognize our participation in photography’s representation of the real and, especially, the oscillation between acts of memory and acts of imagination that make photographic experience matter,” writes Martha Langford near the end of the chapter “Memory and Imagination” in her book Scissors, Paper, Stone: Expressions of Memory in Contemporary Photographic Art. But it’s the final paragraph of that chapter that sprang to mind when I finished Fault Lines: “The photographic spaces that we create between the original and translation are filled with purposive imagining: we are sometimes pointed toward change. Works such as Wall’s and Yoon’s want us to reimagine our communities,” Langford writes. Taken as a whole, the images of Valerie Zink and text of Emily Eaton in Fault Lines seem to want us to do the same.

Such a call to our imaginations comes in “A Note on the Photographs” at the beginning of Fault Lines. Valerie Zink, a photographer living in Fort Qu’Appelle, Saskatchewan, whose seventy-seven striking and evocative full-page black and white images grace the pages, ends the brief note with this: “More than a lament for a pastoral plains, these images testify to a moment of transition and urge viewers to consider the complex consequences of rural communities’ engagement with the oil economy.”

A distillation of a research project, the accompanying text “is based on more than seventy interviews” conducted by Emily Eaton, associate professor of geography at the University of Regina and author of Growing Resistance: Canadian Farmers and the Politics of Genetically Modified Wheat. In the introduction she gives a brief overview of the “boom-bust cycle of the oil economy” and states “This book explores the contradictory nature of the recent oil boom in Saskatchewan and examines how individuals and communities living amid oil struggled through a mix of engagement, celebration, ambivalence, and resistance to oil economies.” And Fault Lines does this, using select examples from the interviews as snapshots to illustrate her points.
What Fault Lines does not do is give us a good sense as to who Zink and Eaton are in relation to the places explored and this question haunted me throughout the book. Whose gaze are we considering, whose vantage point? In the introduction to Forest Prairie Edge: Place History in Saskatchewan, Merle Massie introduces herself. She tells us who she is, where she comes from, her relation to the place under examination, and why the research is important to her. This context makes it easy to understand why people would invite her in and why they’d open up to her during interviews. Thus she establishes a level of trust in the reader. No such information is given in Fault Lines, though one must assume that the more than seventy people interviewed must have asked questions of Eaton before they consented to interviews.

Like the last sentence of Zink’s note, the second last sentence of Eaton’s conclusion is a call to our imaginations: “The burden is on us all to bring to life alternatives that can break the cycle of boom and bust and that are more environmentally and socially just.” At this point I called my partner Harvey into my office to look at the photographs in Fault Lines, the ones of Swift Current in particular. We’d stopped in Swift Current in the summer of 2014 and I waited in the car in a busy parking lot looking at the doors of the very mall Zink had photographed that same summer. My experience in that parking lot, a place buzzing with the young and the old, the seemingly affluent and the seemingly poor, a range of hipsters and hippies, suits and cowboy hats and campers and truckers with travel mugs sweating like me, ring-billed gulls circling above, contrasts sharply with the lone figure of an elderly man walking away from the mall as captured by Zink. That summer I marveled at how much Swift Current had grown and changed, how vibrant it seemed, and remember the feeling of joy and relief when Harvey finally appeared in the crowd with our camping supplies, a loaf of French bread, a chunk of Gouda, and a big bag of ice.

In Hold Still: A Memoir with Photographs, photographer Sally Mann writes, “All perception is selection, and all photographs – no matter how objectively journalistic the photographer’s intent – exclude aspects of the moment’s complexity. Photographs economize the truth; they are always moments more or less illusorily abducted from time’s continuum.” In Fault Lines, thought-provoking images, engaging writing, and the careful curation and placement of image and detail are further enhanced by a beautiful and clever design. The first page of the chapter titled “The Past, Present, and Future of Oil in Saskatchewan” ends mid-sentence: “An exploration boom ensued, and by the early 1950s the industry had expanded into” and this is where you turn the page to find the image of a grinning girl in a cowboy hat, her two front teeth just beginning to grow in. We’re expected to notice this expanse and expansion, I suspect, this gap and growth, and I suspect that we’re expected to feel clever, make the expected imaginative leaps, and buy into the overall design.
Posted by Brenda Schmidt at 6:33 PM