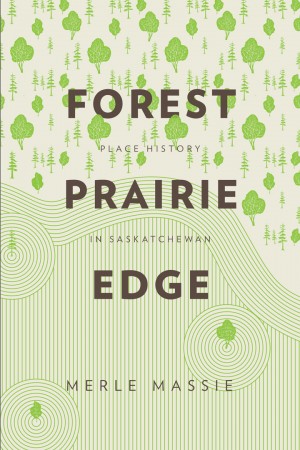 “I have great sympathy for those travellers who look out their windows on the Trans-Canada Highway and think This is Saskatchewan? That’s it?” writes Merle Massie on the third page of the introduction to Forest Prairie Edge, an eye-opening “deep-time historical investigation” that focuses on an area of the forest fringe that “extends north from the city of Prince Albert” and includes the “stumpranch” farm where she grew up, a place well north of the “That’s it?” zone. Raised on a prairie farm, I have little sympathy or patience for those who express such tired sentiments, whether the comment is used to establish common ground, begin a conversation, set the stage for an argument, or not, but Massie’s viewpoint as an “insider” and her straightforward and often confrontational approach prove engaging, the book revealing and rewarding.

Massie, a Saskatchewan writer, editor and farmer who specializes in local, rural and environmental history, notes that her university colleagues worried that her research area, an area covering more than 400 square miles, was too small, while the people in the region worried that it was too large. Deeply researched and tightly argued, the book is just right. “Emphasizing contrasts and connections, this book investigates the artificial dividing line between the north and the south,” examining the period “from pre-contact to the end of the Great Depression,” an immense undertaking if the extensive section of notes and the bibliography are any indication.

The forest prairie edge, a transition zone, is complex and ever changing. Massie uses "edge theory" as a means to interpret and frame the research:

Edge theory, where the forest fringe is viewed as both an ecological and a cultural edge where two distinct regions and peoples meet and exchange knowledge, offers a critical approach that bridges the constructed gap between Saskatchewan northern history and southern history. Regionally defined prairie and northern narratives, when combined and focused through a local viewpoint, give a fresh view of the provincial story.

Fresh it is. Massie claims “The Canadian penchant for dividing this vast country into easily understood places called regions has reduced Saskatchewan identity to its southern denominator: prairie.” Throughout the richly detailed book she shows how “Studying western Canadian history through the lens of either “prairie” or “boreal forest,” without considering the connections between the two, has created flawed interpretations and a tendency to start with basic (and incorrect) assumptions.” In a fascinating analysis of the Great Trek, the Depression migration in Saskatchewan (and Alberta and Manitoba to a lesser degree) that saw thousands of people move from the prairie to the forest fringe, she points out the gaps and inaccuracies in the historical record as it currently stands.

Evocative figures (including a drawing by Massie of a lobstick tree) and easy-to-read maps accompany clearly written passages on First Nations settlement, non-Native settlement, soldier settlement, resource extraction, tourism marketing, car culture, forest edge agriculture, and Government intervention. Near the end she points to many aspects that require further study. There is so much that is not known, so much yet to properly explore.
“I hope that this book will challenge conceptions of Saskatchewan, how people have lived here, and how those stereotypes have shaped the ways in which we tell our stories,” writes Massie. Challenge it does. This provocative place history, which calls even Saskatchewan’s designation as “the Land of Living Skies” into question, offers a powerful lens through which to view, interpret, and further question the place in which we find ourselves, regardless of where that is.
Posted by Brenda Schmidt at 8:51 PM

This sounds terrific. I love these deep histories (thinking of Candace Savage...).

I love them too.