This morning as I walked beneath the full moon

...and all those stars, stars I failed to capture in this unsteady shot, 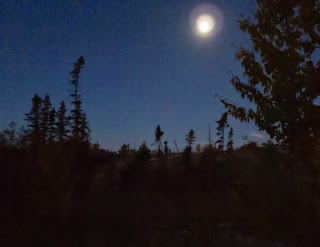 as waves of snow geese headed south and the light grew in the east and lit up the town, I thought about all the years I've lived here and all the times I've witnessed this kind of drama. Of course it's never the same. Something always surprises me. For one, snow geese now have the power to make me weepy. Just the sound of them is enough. So much for being unsentimental.

It was a long walk. On the way home my thoughts turned again to the thoughtful and thought-provoking letter of congratulations from Doyle Vermette, MLA for the Cumberland constituency, that arrived the day before last. Place figures largely in the letter. It's now pinned on the bulletin board beside my desk.

As the town grew brighter, flocks of migrating sparrows that summer well north of here -- Harris's, White-crowned, American Tree, Fox -- offered up a typical fall mix of calls and not-quite songs. Though I could hear them moving in the grass and trees right beside me, they were nearly impossible to see in the low light.

The chatty magpie that usually sits on the tower by the Creighton Town Office wasn't there. Perhaps it was too early. As I passed by I thought about all the people who make this town work so well. I sent the Town of Creighton a message the week before last to let them know I'd been shortlisted for the Lieutenant Governor's Arts Award for Saskatchewan Artist and to thank them for their support of the arts. It matters. I attached an invitation and provided a link. Those familiar with my work know how important this place is to my work. I also wanted to let the Town of Creighton know that I'd sent off a photo to the Saskatchewan Arts Board that was taken at the Creighton Town Office when I read there for the Mayor's Poetry City Challenge last year, an invitation extended to me by the town administrator and one that I hesitated to accept, but was happy I did. I had fun. That's more than evident in the photo.

I thought, too, about the people who've helped us get to know this place better. I didn't walk by their places as they're not on my route, but I looked for lights in their direction. I always do.
Posted by Brenda Schmidt at 7:58 PM

A wonderful evocation of place and community and the way they entwine...