Sometimes it's hard to believe

...that someone might actually read the words I bring together. Among the upsides to this is a feeling of freedom. It can be dispiriting, however. Even after five books it's sometimes hard to believe in the work. I expect it will always be this way.

Last night was no exception. Thankfully H called me away from my writing to witness the weird sky overhead, the strange rainbow in the east. It was short-lived, but I managed to get a few pics. I posted this one on Facebook 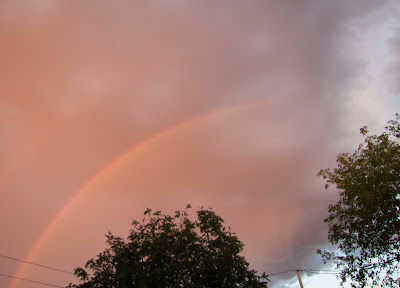 along with a terrible but true caption, and the fun began. And then it ended. In my news feed not an hour later was a post announcing the end of SoundXchange - CBC Radio Saskatchewan's Words and Music show. The final show will air on October 5.*

The news hit me hard. No doubt the entire arts community in Saskatchewan is feeling the loss already. It's a huge loss. SoundXchange is dedicated to Saskatchewan artists, its beautifully produced shows opening up and building upon the unique nature of this region. Kelley Jo Burke, a brilliant artist, host and producer, accepted my work for broadcast at crucial points in my writing life. Or they became crucial points. Hearing other artists bring your words alive is transforming.

* Update: The show has been extended. The final date is October 19th.
Posted by Brenda Schmidt at 12:34 PM

Beautiful tribute, Brenda. We'll hope it comes back in some other form.

Thanks, Gerry. Yes, I look forward to hearing what's in the works.

oh love thank you so much. It was a honour to work with your beautiful writing. Kelly Jo