...and on Facebook and Twitter I see them ever more frequently as important matters teeter on the brink of catastrophe. Unfortunately, these petitions are often end-stage. A lot happens before things get to that point.

It makes much sense to be actively involved in the shaping of policy from the get-go. By that I mean getting involved with candidates in their bid to become leaders and making sure your priorities are considered and reflected in the policies they put forward. All party leaders pay close attention to the policies of leadership candidates. That in itself can lead to change.

Lately I've been inspired by a number of people in the arts who have entered politics. Recently, Dick Cannings, a well-known and respected author, biologist and birder, became the NDP candidate in the Penticton constituency in BC. Many others I know are becoming more involved and working behind the scenes.

For every candidate there is a team. Bernadette Wagner, a fellow writer and feminist, is the one who pointed me to Saskatchewan NDP leadership candidate Ryan Meili, a family doctor in Saskatoon whose work and vision for a healthy society has great potential to bring forth meaningful change for individuals, communities and the environment. 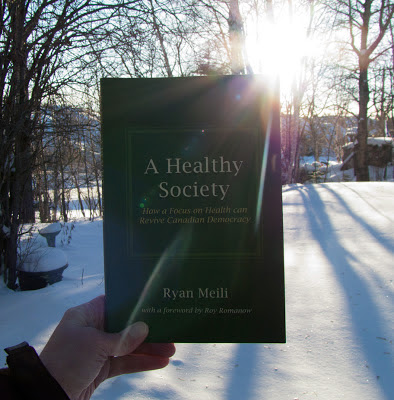 I got involved and I'm having fun. Bye bye apathy.

Here's the letter of endorsement by Dr. C. Stuart Houston, a well-known author, important figure in the medical and natural history circles of Saskatchewan, and mentor to many; I've long admired the work he has done and continues to do. He is beyond amazing.

For $10 you can get a membership and make a difference. It takes but a minute.

Being involved makes me feel far more hopeful and responsible. I will continue to sign petitions, yes, but thinking ahead and creatively is what I do best.
Posted by Brenda Schmidt at 2:55 PM

Brenda, you rock! Thanks so much for joining Team Meili. I've worked a lot of campaigns over the years and I have to say that this one is the most fun, ever!

Get those memberships, folks!

Thanks, Bernadette! You rock! This is exciting.