...and described here on the new Kalamalka Press site. It speaks well to what I was aiming to do in this book. 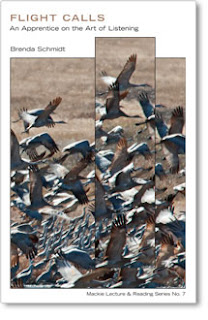 Big thanks to Kalamalka Press for the incredible experience. If you check out the people behind Kalamalka Press you'll see Flight Calls was in mighty good hands. Among the members listed on the About page you'll find John Lent and Chris Clarkson, the editors of this book. The process was a joy and I learned a lot.

I'm grateful to those who play a part in the essays. As you can see in the book description, I called on Gerald Hill in a big way. He delivered. I called on Bernadette Wagner for a particular essay. She delivered. All in all, it was challenging and fun.

Kalamalka Press has recently shifted its focus and there are new initiatives, one of which is the annual John Lent Poetry-Prose Award. Congratulations to the first recipient, Ariel Gordon. The Mackie Lake House writers in residence for 2012/13 have also been announced. There's lots more going on at Kalamalka Press, including an exciting partnership with Okanagan College's Writing and Publishing Diploma Program, so have a look.
Posted by Brenda Schmidt at 10:11 AM

Again, Brenda, I am forever grateful that you thought to not only ask but also include my ramblings about listening regarding the Carolyn McDade recording project, Widening Embrace.

I thank you! Your responses were wonderful!

I'm currently reading this book, a fabulous experience. Humming, insects -- and a wonderful careful attention paid to the wondrous and the plain. Thank you for it.
tk

Wow, thank you! Oddly, or maybe not, as I don't understand how these things line up in life, I am currently reading and savoring Mnemonic: A Book of Trees. I wish I'd had the book earlier. The rooting, branching and veining of memory, of story, history and legacy, the deep reaching, deep reading (the passage with Pan, for instance), the intent listening, all the connections...it's a rich and inspiring read.

Just to clarify: by odd I mean an odd coincidence. Given my interests, it's no surprise I'm reading the book!