...of freezing rain this morning and more snow on the way. Some rain has fallen already. I could feel it on the snow when I cleaned off the step and the bird feeders.The coffee was ready by the time I came in. I checked my online haunts, Facebook among them. Then I visited Navigatio, a new blog by Frances Greenslade. She has arrived in India where she is researching and writing a new novel.

India captures my imagination. I bought A New History of India by Stanley Wolpert years back and read it one winter. In January, I think, as that's when the snow and cold tend to take hold and I seek some kind of escape. I can't find any mention of it on my blog. Perhaps I read it before I began blogging. 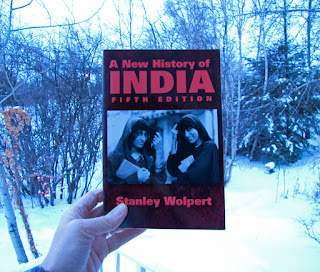 The pine grosbeaks and redpolls were chattering softly when I stepped out to take this pic. During the winter I'm always up before it's light, but if I were to sleep in, they're too quiet to ever wake me. I can't imagine being in a place where I'd need earplugs to sleep through the birdsong. A birder's dream.
Posted by Brenda Schmidt at 10:27 AM

Since I read her post all I want to do is go birding!

You seem to have the same winter birds as we do; I guess we are only a few hundred miles apart after all.

I have a friend who is annoyed by the chattering of birds outside her window, and wears earplugs to bed or when working to keep the sound out.

I'm the opposite; I love the sounds of birds and find it relaxing, and if they wake me up, more's the better!

I know places even in SK during breeding season where birds figure it's morning when I still think it's night. Earplugs would be an idea if I had to stay there long and wanted to get any writing done.

Hi Brenda, I have awarded you a Liebster Blog Award. See my post here:
http://kimberlygerson.com/2012/01/liebster-award-and-my-picks/