...of the South Main shaft will happen tomorrow. The mine shaft, sunk in 1939, is less than a kilometre east of our house. Here's a photograph of what the South Main headframe looked like all the years I've lived here held against its current pre-implosion state. 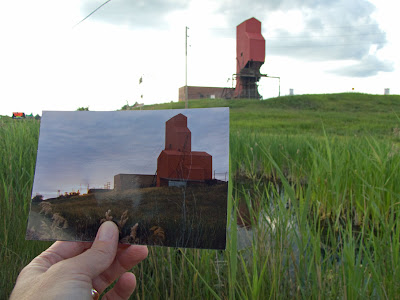 A press release in Friday's paper details the sequence of events and approximate times:

Yesterday a crew was going around putting up signs. They were pounding one in a few feet behind us as I took this pic. It was eerie.

So tomorrow morning, before 5 a.m., people will make their way to the designated viewing areas to watch this landmark go down. I don't know if I'll be among them or if I'll stay home and calm the cat. I'll likely just sit here until the dust settles.
Posted by Brenda Schmidt at 11:09 AM