...called to let us know that the goldeneyes were back at the Sturgeon-Weir River, about a 30 minute drive from Creighton. So we headed off this morning to check things out. On the way, near Nesootao Lake, I said whoa, there's a bluebird. And sure enough, we turned around and there it was, hunting in the ditch. H was driving and it was on the passenger side, so I used H's camera to get a couple quick pics. 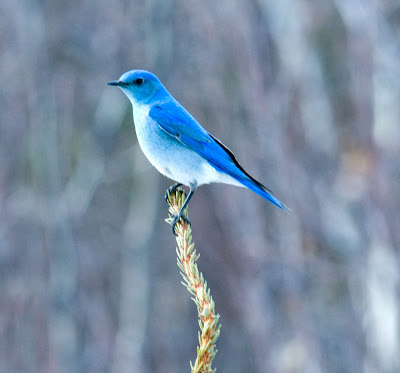 This is the first bluebird we've seen up here in our 20 some years of birding in this area, though I suspect they've been coming here all along. As you can tell in this pic, we still have a fair bit of snow, making the bird easy to spot. 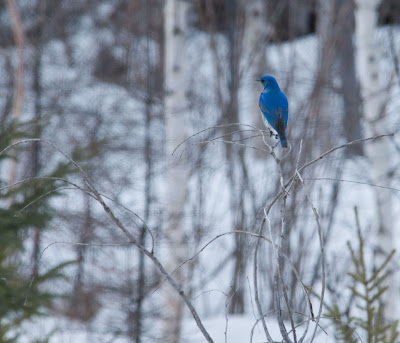 Because the ditches are still full of snow, it was concentrating on the narrow strip of bare ground right at the edge of the road. Or at least that's what it was doing in the very brief time we were there.

So off we went. A short while later we arrived at the Sturgeon-Weir River. Sure enough, there were 22 Common Goldeneyes on the open water. No Barrow's among them. We set up the scope and watched the males throw their heads back while the others looked on. What a wonderful production. 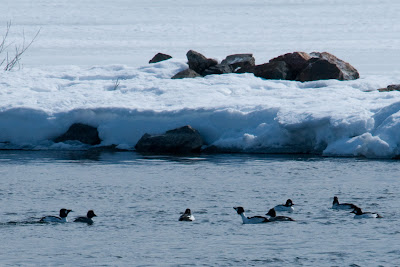 As we watched the ducks, a lone Canada Goose flew over. It sounded so lonely.

Meanwhile, three otters were busy fishing in the distance. Here's one of them. 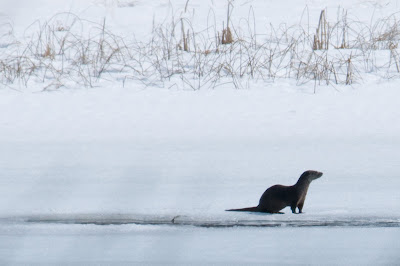 There's something about the way otters move. No matter what they're doing, it looks like they're completely engaged and having fun. They never fail to leave me smiling.

On the way back to Creighton we saw a Bald Eagle. Another sign of spring. Our source told us about the eagles, too. The only thing we didn't see was the black wolf.
Posted by Brenda Schmidt at 1:39 PM

How nice to see Bluebirds all the way up there !
I still haven't seen an Otter in Canada.
Nice pics Brenda !

Thanks Nick! The bluebird was such a nice surprise. We just wanted a photo record of its presence. These aren't sharp, but not bad considering how unsteady I was. It's so nice to see the birds returning! Oh, and the Sturgeon-Weir is usually a good bet for otters.

I wish I'd been in your backseat, mostly asleep but slurping on a London Fog.

That would've been so nice! But really, how could you possibly sleep with all the babbling I do?

Oh, I'd have figured it out. Middle aged B babbling is nothing compared to possessive toddler babbling (mum. Mum? MUM!)...

Thanks! It was spring the instant I saw that flash of blue. I grew up in one of Canada's important birding areas where migration is dramatic, and after all these years I still long for that drama. One has to be more patient up here. There is drama, but it unfolds so differently.

What a lucky day it was! So energizing!