...is the first thing I get whenever I go to an auction. This was my number on Sunday. 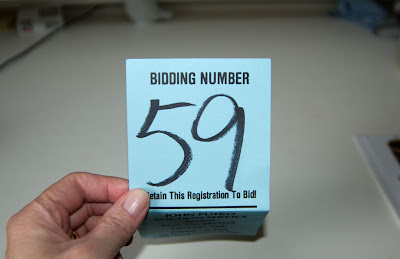 So, in a small town nowhere near here, I sat with my number in hand. I almost bid on a crowbar. An antique corn planter. A grinder that went for just two bucks. I'm still kicking myself over the apple cookie jar.

In the end, I only raised my hand to eat a burger with fried onions. Auction burgers are much like rink burgers. The only difference is the environment in which they are prepared and consumed. It's an environment I love. As I ate I watched the auctioneer. The crowd. The fingers. The nods. The side deals.

*
Speaking of side deals, I did end up with a crowbar. It wasn't from the auction, but because of the auction. And you never know when a sheep bell will come in handy. 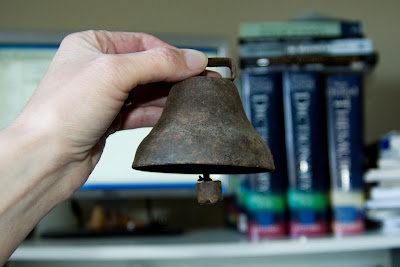 *
After the auction we headed to Regina where we raced around to get things done and then over to Aegean Coast Coffee and Tea for the Vertigo Reading Series where we heard Sandra Birdsell, Ian LeTourneau, Kelly-Anne Riess, Kris Brandhagen and Shane Arbuthnott. Chatted with some writers I haven't seen in quite some time. Some I'm just getting to know. It was nice.

After the readings, we stopped at a Tim Hortons before hitting the road for the two-hour drive back to where we were based. As the server filled our cups, she asked H where we were headed. This led to that and soon they were talking about people they both knew from Flin Flon and how they were just in Regina to visit their new grandchild. Small world.

And the world kept getting smaller as we drove off into the night. From double lane to single lane to the curves of the Qu'Appelle Valley. Ditches, all eyes. Mostly deer. The odd coyote.

*
Tuesday. More visiting. More sorting. CBC Newsworld in the background. The same swine flu news over and over for hours. Switch to CTV Newsnet. Hours later, switch back.

*
Headed home yesterday. When we set out, we saw a turkey vulture ride the wind over the highway, heading north.

*
This is what greeted me at the post office when we got home. 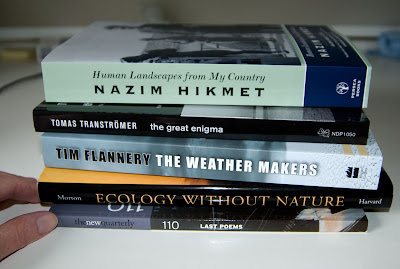 A perfect end to a perfect road trip.

*
Today I've been giving some thought to the sheep bell. Here's a 12 second video summary of my thoughts.

Posted by Brenda Schmidt at 2:58 PM

the Great Enigma: a mighty fine book! one of the best I have on my shelves.

nice seeing you again in Regina!

and I am getting better at identifyig birds: in the last few days I've seen my first yellow-rumped warbler and fox sparrow. Not to mention the beautiful downy and hairy woodpeckers and the thousand junkos!

Nice to see you too! Great reading!

Good to hear! I decided to buy it when I was rereading McKay's Deactivated West 100 where I came upon Transtromer's name yet again and looked at my shelves wondering why on earth I don't own a book by him. I look forward to reading it.

Nice! Our first fox sparrow showed up today. The yellow-rumped showed up on the 20th, right on schedule. H keeps track of the arrival dates. And we had about thirty robins in the yard late this afternoon!

That bell will come in handy for poetry readings!! It'll be the new rage.

Lovely to see you and H at the readings!

Lovely to see you, too! It's a lovely venue. Mighty fine readers. And a mighty fine host.

The vid cracked me up! Love that bell.

Thanks, Shawna! The bell is now sitting on the desk beside my monitor. The black sheep is back in position. It hugs my lamp.

"And the world kept getting smaller as we drove off into the night. From double lane to single lane to the curves of the Qu'Appelle Valley. Ditches, all eyes. Mostly deer. The odd coyote."