1. Because it reminds me of the farm where I grew up.

2. Because it reminds me of play. I liked playing with toy tractors when I was small. Moving earth. I didn't think much of dolls.

3. Because it reminds me of time spent on a tractor. When I was a teenager, I began driving a Massey 1500 4wd. And later, maybe the 1805. I can't remember for sure. Regardless, it was a beauty to drive.

4. Because it reminds me of the songs I'd sing while cultivating a field. I listened to CHAB. Trooper was big at the time. Mostly I'd listen to tapes. Rough Trade over and over. Their lyrics had great influence on the poems I was writing at the time.

5. Because it reminds me of how much I loved the power of the tractor. I remember a particular hill on the east side of Bone Coulee that I'd drive up and at the summit all I could see was sky. Then I'd turn right.

6. Because it reminds me of the gift of imagination. Tractors mean daydreams. Ideas. Risk. Luck. I almost hit a power pole with the cultivator. I had a flat on the cultivator once and didn't notice it was pulling heavy. I learned to pay closer attention.

7. Because it reminds me of the value of work. Of all that can be learned when you get your hands dirty.

8. Because it reminds me that things break down. That things can be fixed.

9. Because it reminds me of the summer when Shelley Sopher photographed the tractors in this book. Gerry was asking questions about the tractors. They let me tag along. I was working on Cantos From Wolverine Creek at the time. While Shelley took photos and Gerry interviewed, I was inside the buildings looking around. The poems "Chop Bin," "Stelcoat Barn," "Diesel" and "Fear" all began that day. The poems "Birthing" and "Nuthatch" contain tractors and also came out of that time.

10. Because several stories of my family appear in 14 Tractors.

11. Because it reminds me of the summer I listened to my family tell these stories for the sake of 14 Tractors. Some stories I remembered. Others were new to me. There was lots of laughing. We were sitting outside. It was hot. I had a computer on my lap. Wireless highspeed. How things change.

12. Because three of my photos are included in 14 Tractors. These photos are important to me not because they're mine, but because the two Case 600s in the photos have been on the farm longer than I've been alive. They're tough. They still work like a charm.

13. Because I was paired with the author of 14 Tractors back in 2001 in the Saskatchewan Writers Guild mentorship program. He's a wonderful mentor. He helped me find a way into the writing community. And here I am.

14. Because the author of 14 Tractors is a wonderful friend. 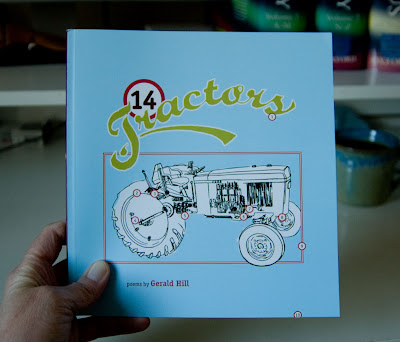 14 Tractors came in the mail today. I haven't had a chance to read it all yet, but going by what I've read so far I think it's safe to say I'll have another 14 reasons in no time.
Posted by Brenda Schmidt at 4:41 PM

Yes, it sure looks great!

Brenda, you are so cool (#3)! my father still wants to see me handle a tractor (I'm no good). reminded me of when I worked at the diner in my village and the guys would drive their tractors over at lunch.

Small town diners are the best! I love going back home and tagging along to town for coffee row. The best conversations anywhere happen there.

Um, looking at that photo again, I have to ask: does it hurt to make your thumb do that?

Well. The thumb does what a thumb must to make a pic work.

I agree with Evie - major cool factor. The book looks great too!

Thanks, Shawna! I feel pretty lucky. I was just admiring the design of the book. NeWest did a mighty fine job.

It looks great! I'll get my own copy on Friday. I wonder if we should arrive on tractors?

Maybe there will be a sequel: 14 Tractors After L(a)unch.

I envy you! I wish I could be there. Knowing Gerry, it will be a dandy launch.